Design the lifecycle for PowerShell scripts as a DevOps Engineer

You want to implement a lifecycle for scripts. This should support the stages from planning, development and testing to going live and a possible shutdown, in the team. You can integrate source control in GitHub, GitLab, Bitbucket, TFS, svn or others with ScriptRunner Software and develop your scripts in Visual Studio Code.

The ScriptRunner ISE Add-on provides you with all necessary features for professional script development. The add-on is mainly designed for admins in smaller teams and establishes the direct connection from the ISE to the ScriptRunner repository. It includes functions for check-out, check-in and upload of scripts, version history and file versioning.

A continuous IT operation requires know-how, functioning processes and good tools. As an experienced PowerShell DevOps engineer, you want to design the process for PowerShell scripts to benefit everyone.

Starting with methods to identify, evaluate and describe the appropriate use cases, individual scripts and modules must be encoded. Use Git or TFS for all of these steps. The use cases are then built and tested in a separate ScriptRunner test environment.

After the final test, the scripts are released in Git or TFS and synchronized with the ScriptRunner production system. The actions can then be set up or transferred. The scripts are now running in operative mode.

Monitoring and changing the use case requirements completes the script lifecycle. Alternatively, the lifecycle for a script ends when it is shut down. 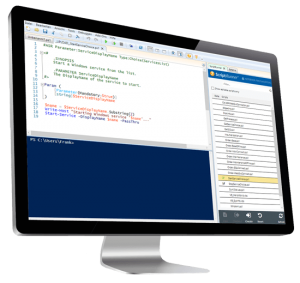 Grab the ActionPack for Script Synchronization and quickly sync projects or repositories in git and Team Foundation Server (TFS) to your ScriptRunner script repository.

Best for PowerShell DevOps: ScriptRunner, Git or TFS and VSC

ScriptRunner, Git or Team Foundation Server (TFS) and Visual Studio Code (VSC) are the ideal combination for your script lifecycle.

Set up git or TFS repositories, for example, according to topics or responsibilities. Within each repository, at least two branches are created for development/testing and production.

Use VSC with the PowerShell extension to develop scripts on all DevOps workstations and connect to the corresponding repository on Git or TFS.

The scripts in the branch “Develop/Test” synchronize with the ScriptRunner test system. This allows you to develop, modify and test your scripts at your leisure.

After all tests have been successfully completed, the scripts are released for production and merged into the branch for production. The ScriptRunner production system synchronizes the shared scripts and makes them available in the policy sets. 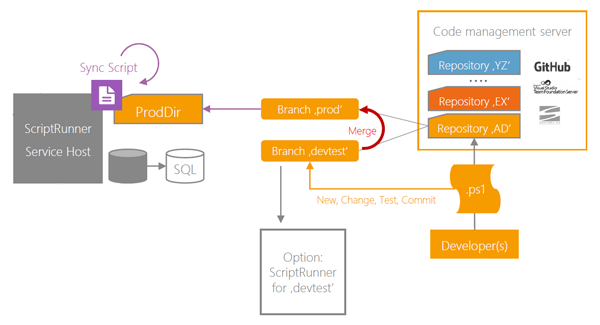 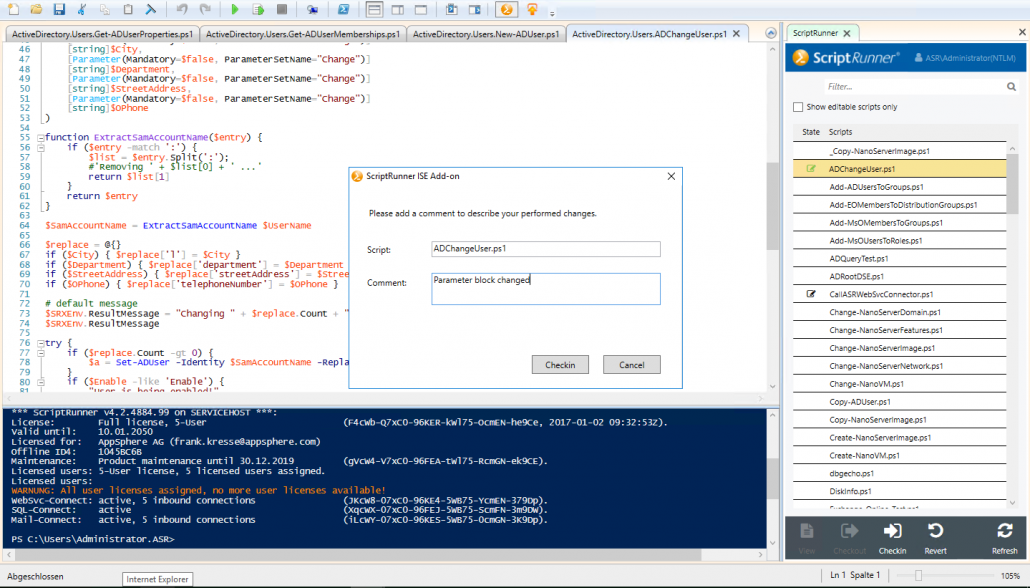 The ScriptRunner ISE add-on is a plug-in for PowerShell ISE. It connects the ISE directly to the script repository. The add-on supports the development of scripts in a one-step process and is installed on the Admin clients.

A search filter helps you to quickly find the right script in your repository, taking into account file names and tags. Optionally, you can limit the search to modifiable scripts.

A list of all scripts in your repository. Scripts that have been approved for modification in the Admin App are marked with a pen icon. Additional information is displayed via tooltips.

By clicking “View” the selected script is loaded into the ISE and displayed. “CheckOut” and “CheckIn” control access when changing scripts. Checked out scripts are highlighted in color and are locked for access. The option “Revert” lets you discard changes in this phase.

Additional information is requested when checking in a modified script. A successful check-in is noted in ScriptRunner with a timestamp in the script history. The old versions of a script are stored centrally with the respective history timestamp.

You can upload newly created scripts directly to the ScriptRunner script repository. The scripts can be tagged and renamed beforehand.

You can permanently activate the ISE add-on in your profile with Enable-ISE ScriptRunner to always have access to the app after starting the ISE.