What is PowerShell Scripting Language?

PowerShell is an object-oriented programming language associated to the PowerShell command-line shell.

Components of the PowerShell Scripting Language

PowerShell commands are the smallest unit of PowerShell scripting. Commonly made up of three different entities, a verb, a noun and a parameter list, the composition displays as follows: verb-noun [-parameter list].

Considering cmdlets like atoms, the molecules of PowerShell scripting would be pipelines. Cmdlets bound together via the pipe operator „|“ increase their ability and multiply the available options, where the output of the first command will be used as the input of the subsequent command.

PowerShell commands can be bundled up into PowerShell modules in order to organize and share them. After installing a PowerShell module, the contained cmdlets can be called by their name. Usually, all cmdlets of a module follow similar naming conventions.

If you’re unsure, what the cmdlets are called, PowerShell ISE’s IntelliSense comes in handy. Alternatively you can use Get-Command -Module [Insert name of the module]  to get a list of all cmdlets of a certain module.

For those with more advanced scripting skills and a wish for auto-formatting, refactoring and code analysis should investigate PowerShell ISE Steroids (w/ISESteroids).

If you are looking for an editor that supports cross-platform, you might consider using Visual Studio Code (VSCode), as it supports multiple coding languages and Microsoft even made a PowerShell extension for it.

Now, these editors are great for the editing, running and scripting part but not for executing or the whole automation of scripts.

To this end, the project Pash has been released. An alternative with almost endless possibilities to automate, delegate, control, supervise, centralize and develop scripts is offered by ScriptRunner.

The command for setting a new policy is as simple as running the command, followed by the desired state (here AllSigned):

PowerShell comes with built-in security functions, such as the above-mentioned execution policies. Another feature is the logging and monitoring of modules and scripts, as well as the transcription of input and output of Windows PoSh commands.

Digital signatures serve two purposes at once: they reveal the authentication (who wrote the script) and the integrity (post changes in the script after being signed).

PowerShell can be used in different language modes, which will result in different availabilities of commandlets, such as:

Note that a language change is only tied to the session, so not permanent. To fix that, the use of a centralized solution like Applocker or Device Guard is mandatory.

Credentials can be entered manually but compromise the ability of a script to be automated. One could save the password information in an encrypted storage data, only flaw: it can’t be copied to another machine and only works on the initial machine.

Just Enough Administration (JAE) assigns limited privileges for PowerShell Remoting (available since version 5.0). It offers a Role-based Access Control (RBAC) with a whitelisting system, with the downside of an extensive maintenance of administration processes and requires the same depth of knowledge for the administrator as without it. 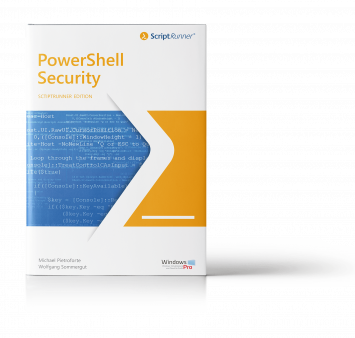 Learn about the numerous possibilities to use the security potential of Microsoft PowerShell!