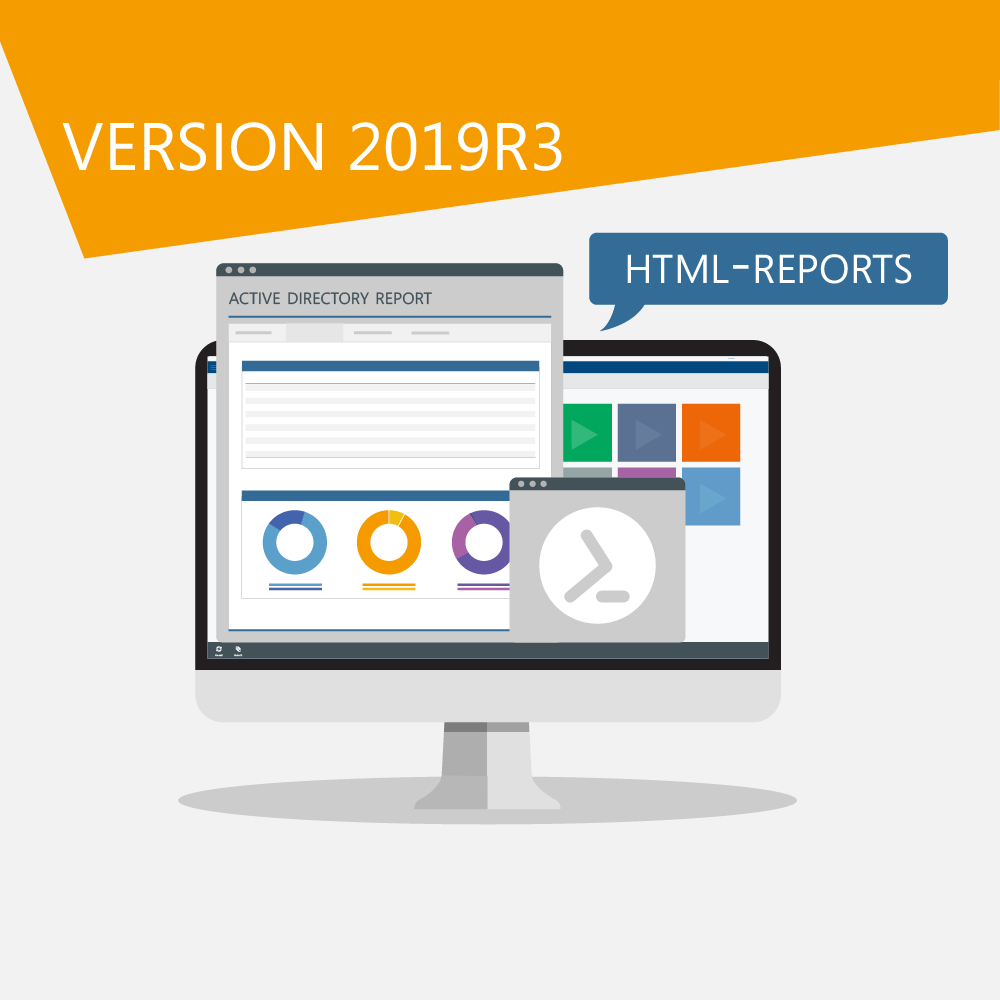 With version 2019R3, we provide you with an additional update containing new features and some fixes before the next major update to ScriptRunner version 2020.

The most important new features in version 2019R3 are

ScriptRunner 2019 can be installed in a Windows Active-Passive Cluster to increase reliability.
During operation, the following resources are used in sharing:

The following settings are bound to a cluster node:

ScriptRunner must be installed on both cluster nodes. In the Cluster Manager, the cluster resources for the node resources and the shared disk must also be set up.

The URI for ScriptRunner Web Service and the Web Apps is provided externally by a resource with a client access point.
Detailed instructions for cluster installation can be obtained from ScriptRunner Support.

With this information, the execution of the PowerShell scripts can be monitored and auditing can be ensured.

With the growing distribution of PowerShell, however, the demands on the content and presentation of result reports are also increasing. Especially evaluations and overviews should be highlighted here.

PowerShell itself offers the possibility to output results as HTML documents with the ConvertTo-Html function. Additionally, there are two popular modules, ReportHTML and PSHTML in the PowerShell gallery to create extensive graphical reports with PowerShell.

With version 2019R3, ScriptRunner now offers this functionality for delegation and automation.

In our video Heiko Brenn, product expert at ScriptRunner, gives you an overview of the new feature:

New use cases with HTML reports

The new function opens up new use cases for ScriptRunner:

Service desk users benefit from a clear and attractive presentation of results of executed actions.

Specialist users are now also moving more into focus. Specific analyses and evaluations for this group can be written with PowerShell (e.g. for the evaluation of distributed data in O365, teams, SharePoint, databases, etc.) and can be prepared in a comprehensive visual format. The processing of the data takes place in the background and the specialist user receives a link to the finished report.

The PowerShell itself provides a function for generating HTML reports. The presentation of the HTML can be controlled with an appropriate CSS stylesheet, for example to apply headers and footers, fonts and colors to all reports.

The corresponding output is generated in the PowerShell script. The following code snippet shows how to create the output and assign it to ScriptRunner via the system variable $SRXEnv.ResultHTML :

The HTML file is saved in the following directory


The display for all users, as shown in Figure 1, is provided by the virtual path http(s)://fqdn/scriptrunner/reports/abcdexyz.html 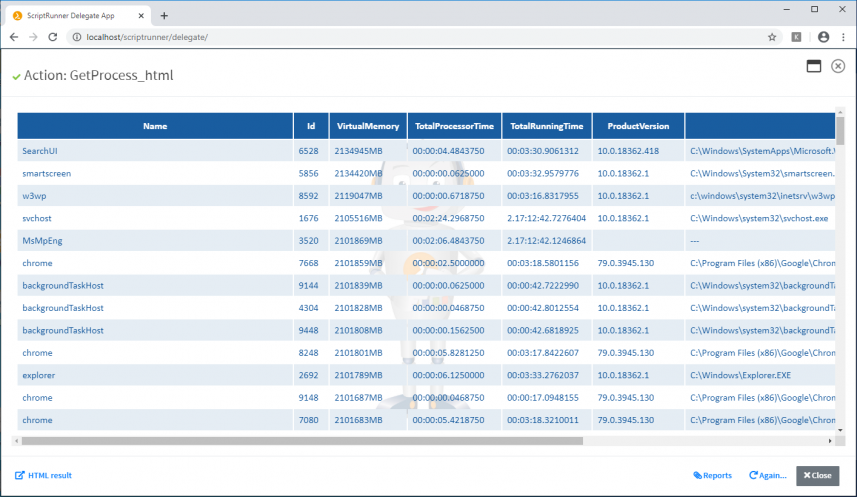 More information about ConvertTo-Html can be found in the Microsoft documentation.

The flexibility of ScriptRunner allows the use of special HTML generator modules in addition to the standard ConvertTo-Html function. Among others, the following modules are recommended for this purpose:

Figure 2: Report generated with the ReportHTML module, displayed in ScriptRunner

An example script for using ReportHTML with ScriptRunner can be found in our ActionPack on Github.

Within our ActionPacks we will successively provide more reporting scripts or refer to such scripts in other GitHub repositories.

The use of HTML reports is supported starting with ScriptRunner version 2019R3. The following extensions are implemented for this purpose:

The HTML reports can be accessed in 5 ways:

To increase usability and application breadth, ScriptRunner’s support for data types and input validations has been enhanced.

The automatically generated input fields in the Web Apps now also support the input of controlled regular expressions. The validation information is generated from the PowerShell script and must be defined in the param block of the script.

In some applications, longer text entries are required as input parameters. The new multi-line feature can be used for this purpose. The definition is done in the param block of the script.

In some applications, text entries should not be invisible on the screen, but should be displayed as a chain of dots. The new Hidden Text feature can be used for this. The definition is done in the param block of the script.

In some use cases it is useful to use the SecureString data type. In the externally visible application, it does not differ from the extended attribute Hidden Text. However, when used within the script, use appropriate cmdlets that support this data type or perform conversions.

Extensions in _QUERY_ and _LIB_ scripts

The reusability of code is always the focus of programming efforts. This also applies to PowerShell scripts.

From the application of PowerShell scripts, function code crystallizes practically at each of our customers, which is used in many scripts by copy & paste. This leads to extensive and hardly maintainable PowerShell code.

ScriptRunner supports the use of PowerShell functions in multiple ways:

The functionality of a Script Library _LIB_ is similar to a self-scripted PowerShell module, but without its overhead and without its inherent static.

A Script Library can contain a variety of functions. It is recommended that functions that are thematically close to each other be grouped together in a separate library. Make sure that a header and a param block exists within each function. This allows individual PowerShell functions in ScriptRunner to be used directly in an action.

To use PowerShell functions in a main script, the corresponding PowerShell option must be set in the action configuration panel, as shown in Figure 3

Figure 3: The PowerShell execution option for preloading library scripts into the session of an action can be found in the configuration panel of the action

If individual functions of a specific library are to be used in a query script, this library can be selected in the query settings (see figure 4).

Figure 4: The script execution option for preloading library scripts into the session of a query can be found in the configuration panel of the query

If you want to use a PowerShell function from a library directly as an action, you can select the function in the main menu Scripts | Cmdlets and create a new action by clicking + New Action (as shown in figure 5).

Figure 5: Create a new action based on a PowerShell function by selecting the according function and clicking “+ Create” in the toolbar

Enhancements to the Web Service Connector

The number of application scenarios of the Web Service Connector is constantly increasing for our customers. This is accompanied by new requirements for using Micro Service as a caller of ScriptRunner actions.

For a better understanding of the different deployment scenarios with ScriptRunner here is a short overview:

ScriptRunner is called via the connector by another backend system. Source systems can be central monitoring systems or application servers, such as workflow systems. Individual service accounts or groups can be configured to authenticate the call to the ScriptRunner server and to assign the actions.

Client applications or client computers can use the Web Service in ScriptRunner directly. Only groups in the Self-Service End User role can be used to authenticate the call on the ScriptRunner server and to assign the actions. The referenced AD groups can contain user accounts or machine accounts.

For reasons of scalability and reliability, micro services are becoming increasingly popular. In combination with ScriptRunner as automation platform for PowerShell, new possibilities for the use of scripts arise. Therefore, the possibility of using Micro Services/Kubernetes as a calling source system for ScriptRunner was introduced (see figure 6). A separate license is required for this.

Figure 6: In order to use Micro Services/Kubernetes as a calling source system for ScriptRunner, the according option has to be selected in the Web Service Connector properties panel

In addition to the major features mentioned above, improvements and enhancements have been made in many areas.

The PowerShell module ScriptRunnerSettings has been extended with some functions for license management.


You can find more information about the customization in our manuals.

We are constantly expanding our existing ActionPacks with new sample scripts. In addition, we are adding new collections to them. The following ActionPacks have been added:

Frank Kresse is the Head of Product and CEO of ScriptRunner. As the inventor of the automation and delegation solution for PowerShell, he advises clients on use case scenarios and develops solutions for the automation and the digitalization of their processes. He is also involved in technology start-ups.